Rounding the north face of the Mount Rainier between Mystic Lake and Sunrise provides an excellent demonstration of the major differences between the western and eastern faces of the Cascades. The wettest section of the park lies between Longmire and Carbon River, and now as you move further east, you will be leaving the temperate climate for more arid country in the rain-shadow. Here, rainfall is less than half of that of the western slopes. Sweeping vistas of rolling alpine meadows lead to the edge of permanent snowfields and talus slopes. Below, forests of white-bark pine and Englemann spruce choke the watershed drainages. Compared to the western Cascade foothills, the air is drier, the low temperatures are lower and the highs are higher. 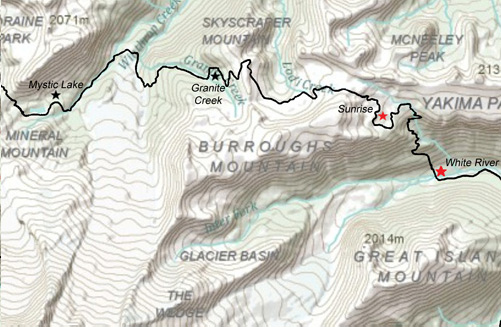 From Mystic Lake the Wonderland Trail continues towards the northeast, dropping steeply for the first half mile until the crossing of the west fork of White River is reached. Here on the lower slopes of Mineral Mountain, log footbridges span two creeks just above where they merge to become the west fork of the White River. Paralleling the stream, the trail then reenters the forested moraine for a short while as it veers northward to avoid Winthrop Glacier. After reaching the moraine below the glacial terminus, the trail approaches the channel of Winthrop Creek, emerging into great views of the mountain and the second largest glacier on Mount Rainier. 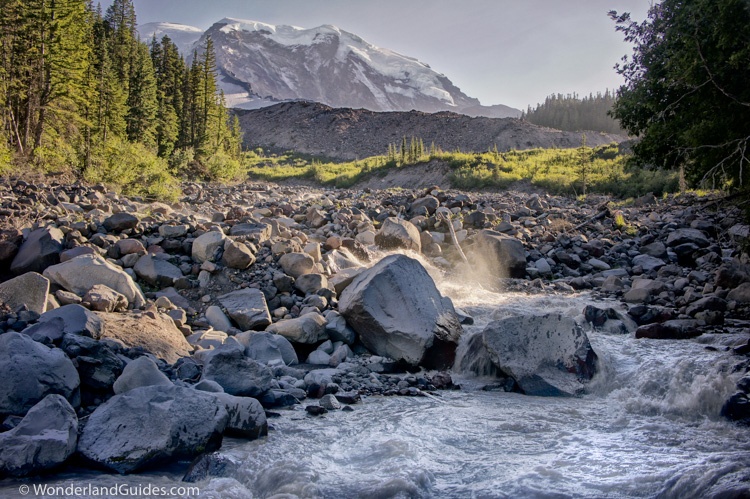 Thick forest clings to the fringes of the rough and tortured terrain of the moraine and river bed. Spring surges and debris flows scour out channels that can reinvent their direction overnight. This short stretch of drainage originates at Winthrop Glacier. The water escapes the deep time of glacial captivity as a turbulent, milky flow thick with rock flour. It flows into the White River just over a mile downstream from the footbridge. After crossing the river, the trail turns southward and climbs steeply alongside the rock-covered glacier, passing the lovely Garda Falls a short time later. 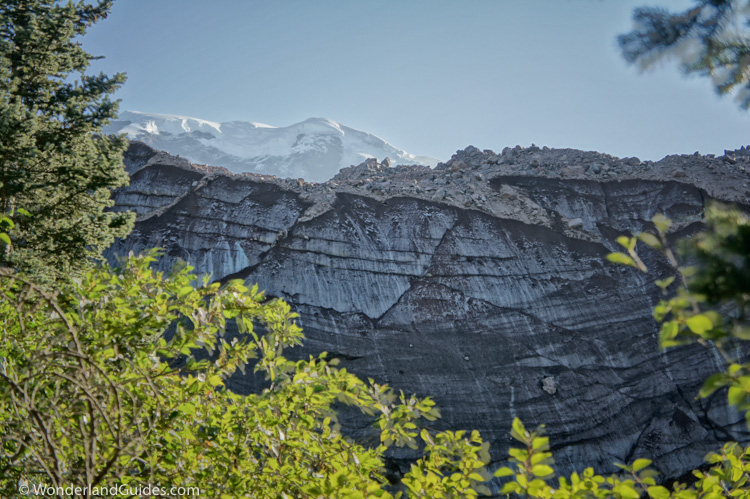 Continuing skyward, the path ascends switchbacks up and away from the frozen, yet dynamic landscape, and one is buffeted by the cool gusts of wind that roll down from the icy wastelands above. Slipping away into the shelter of sub-alpine forests, it is a steady climb for the next 1.5 miles to Granite Creek (5,765 feet).

Granite Creek is an attractive place to camp; there is good water and the few sites are spread out generously along the thinly-wooded hillside. They share one of the man-made wonders of the Wonderland: without walls, a liberated pit toilet sits right in the wide open of a wildflower meadow. Unashamedly utilitarian in its bold placement, this could almost be argued to be a work of art.

From Granite Creek, the trail climbs in a series of long switchbacks through meadow towards a broad saddle below the summit of Skyscraper Mountain. As you near the top of the rise, the panorama becomes increasingly impressive.

To the south, Little Tahoma rises into view above Burroughs Mountain. Tracing the horizon westward, Disappointment Cleaver breaks from the ice fields on the far side of Emmons Glacier. The brilliantly white snowfields of the Winthrop and Emmons Glaciers merge to form the smooth snow dome at the eastern summit of Rainier. On the north face of the mountain, Curtis Ridge jaggedly protrudes from the western edge of Winthrop Glacier, shading Willis Wall until mid-day. Looking further west, you can trace the day’s walk from Mystic Lake to where you now stand. Nearby, the summit of Skyscraper peak beckons, just a short walk to the north. To the east of the divide, a thick forest of evergreens carpets Berkeley Park in the valley below. The Northern Loop Trail passes through there on its way to the high plateau of Grand Park, visible in the distance. Further to the east, the Mount Fremont fire lookout stands out against the sky at 7,181 feet. There is so much to see from here — it is hard to leave it behind, but the thought of food at Sunrise helps to pry one from this pleasant vantage. 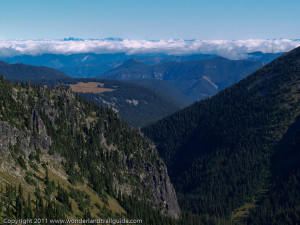 The trail rounds the scree slopes and leads to the large open meadows that make Sunrise such a memorable place to visit. Soon, the Northern Loop Trail junction is reached, and a sign indicates that Sunrise is only 2.3 miles away. The wind whips unimpeded through the alpine fields and marmots decorate the boulders lining the ribbons of streams. On the weekends, the trail starts to become crowded, and as you pass groups of sharply-dressed walkers, you may feel occasionally assaulted by clouds of perfume. At Frozen Lake, a five-way intersection of trails gives one some choices: The Mount Fremont Lookout Trail leads to a dead-end at the guard tower, 1.3 miles to the north. The official Wonderland Trail follows a slightly circuitous route to Sunrise Camp (6,245 feet) and Shadow Lake before bringing one close to Sunrise Lodge. Just 0.6 miles up the trail, however, you will intersect a 0.9 mile trail to the visitor’s center. This gentle descent is the most direct route to the lodge. The remaining option is to follow Sourdough Ridge 1.1 miles before descending to the parking lot (another 0.6 miles). 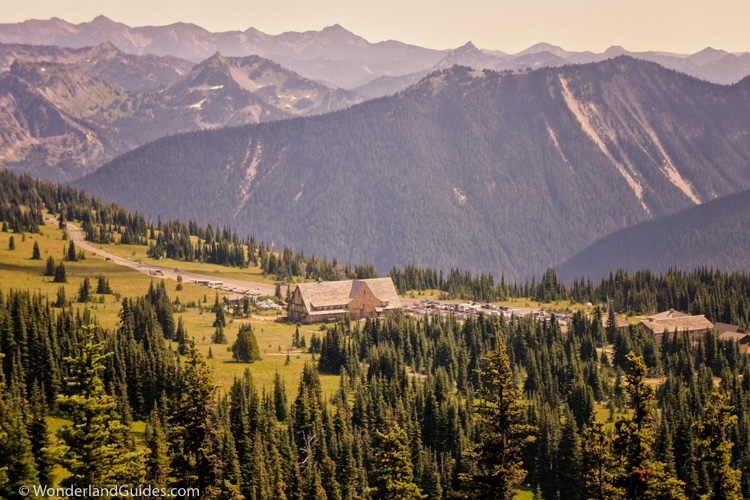 If you’re after views or don’t plan to stay at Sunrise Camp, take the Sourdough Ridge route. This path is usually quite crowded with tourists and grows to the width of a roadway as you near the visitor’s center. It offers memorable views of the Sunrise development with a backdrop of Emmons Glacier.