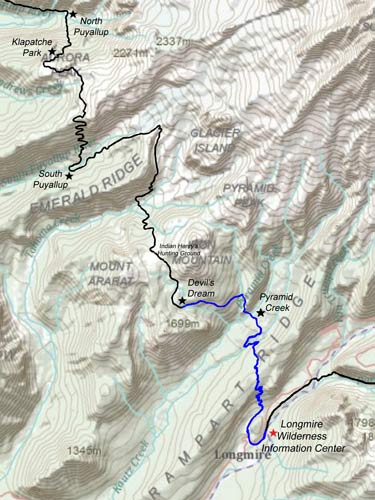 Longmire is the Wonderland Trail’s greatest brush with civilization. This is the most popular place to start and finish the 93 mile loop and it is buzzing with tourists most days of the summer. Longmire is an entertaining mix of people – some reeking of perfume, others reeking of body odor after days on the trail. You will find people preparing for summit attempts, others clambering off of tour buses, and in the restrooms you might just spot a man in a suit washing his hands next to a “ripe” backpacker drying his socks on the hand dryer. If this isn’t your cup of tea, you will find it refreshing to leave Longmire behind you as you embark on your adventure.

Though a popular choice, Longmire isn’t the only place to start the Wonderland Trail

Rather than join the masses and start your trip at Longmire, Mowich Lake and Sunrise also make fine places to start and end the trip. Starting at Sunrise, I find it to be a nice treat to arrive at Longmire around lunchtime on the fourth day of the hike. Here you can pick up a food cache at the ranger station, give your face a good scrub with warm water, and have an espresso and a sandwich at the Longmire lodge if you would like.

If you’re headed clockwise arouth the Wonderland Trail, the direction of the day is skyward. This stretch of trail climbs in two sections, separated by Kautz and Pyramid Creeks to Indian Henry’s Hunting Ground, just above Devils Dream.

The climb out of Longmire towards the top of Rampart Ridge is steep and can be a bit tiring. If this is your first day on the Wonderland Trail and you find yourself questioning just what you’ve gotten yourself into, consider this section a rude introduction to what life will be like over the next week and a half.

The climb to Rampart Ridge is a well maintained trail that switchbacks through the thickly-forested Cascade foothills. The first few miles is often quite crowded with day-hikers from Longmire who do a popular loop hike over Rampart Ridge. After about 2 miles the Wonderland Trail intersects the Rampart Ridge trail, marking the end of the first climb.

Over the next mile, the trail descends a few hundred feet in elevation to Kautz Creek. This is a point of frequent winter washouts, and the fact that the valley bottom is devoid of any mature vegetation hints at the violence of the snowmelt engorged springtime flows. Sedimentary soil crumbles continually from the steep walls bordering the river bed, and where the trail descends the embankment, one should hurry along to minimize time in spent under the loose ledges. The trail is marked across the valley bottom by cairns which lead to foot logs that span the river.

Though somewhat infrequent, lahars – flows of ice, mud, and debris resulting from an edifice failure such as calving of a glacier – can come roaring down from Kautz Glacier and the mountain above. In the 1940’s the Nisqually-Longmire road was buried by dozens of feet of mud and rock from an enormous lahar which swept down Kautz Creek. Don’t worry about lahars unnecessarily – you probably won’t be lucky/unlucky enough to see one, but just be aware that these happen every once in a while and take this advice: If you think you hear a freight train nearby, note that there aren’t train tracks anywhere in the vicinity. Drop your pack and book it for the trail out of the river bed. 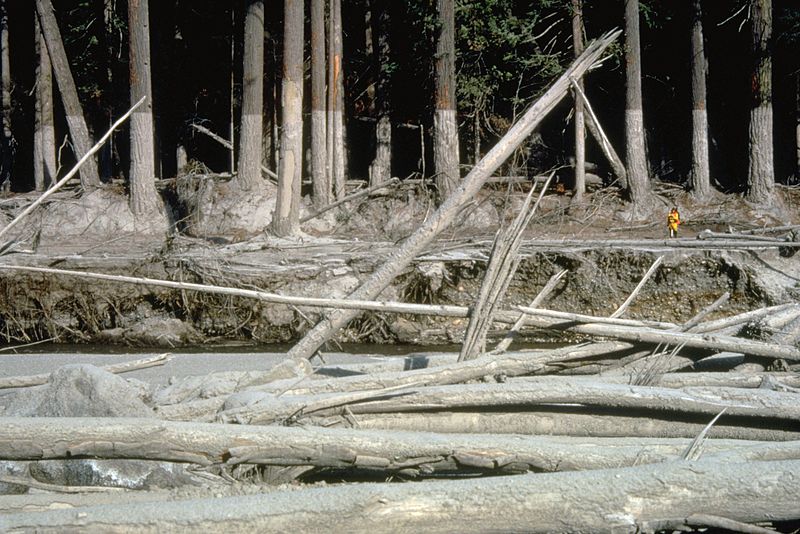 From Kautz Creek the trail climbs the west bank of the creek and continues across the valley to the nearby Pyramid Creek Camp at 3,765 feet. This is a small campground with only a few sites and no space for large groups. For hikers passing through, Pyramid Creek makes a good place for a mid-day meal break to load up on fluids and carbs before making the 1,300 foot climb to Devil’s Dream.

Devil’s Dream Camp is spread out over a steep, forested hillside. The camp is near Mount Rainier's most prominent fault line. As you head northward from this point, you are entering one of the most seismically active sections of the park, known as the Western Rainier Seismic Zone. Interestingly, the local seismicity originating from this area may be due entirely to tectonic activity from the subduction of the Juan de Fuca oceanic plate under the North American continental plate, and not the volcanic activity from Rainier. It is thought that the shallow earthquakes in the WRSZ can trigger the edifice failures on the mountain responsible for the above-mentioned lahars.

The campground’s water source is Devil’s Dream Creek, accessible by a short way-trail leading north into a small canyon just below the campground. This is a lovely place to cool your feet in the stream and chat with other hikers after a long day on the trail. If it is late in the season this may be dry. Water is available from a small lake about half a mile up the hill. Beware that the outhouses at Devil’s Dream are well ventilated, and some of the nearby campsites downwind much of the time. If occasional whiffs of ammonia bother you, move to one of the camp sites either at the bottom of the campground and right at the top.

If you get to Devil’s Dream with much daylight to spare, I recommend a late-afternoon walk up to Indian Henry’s Hunting Ground, about a mile up the trail from the campground. This is a stunning section of the Wonderland Trail that passes by shallow lakes surrounded by wildflower meadows – and photo ops abound. The light is often best for photographs just before the sun dips behind the trees to the west. Keep your eye out for famous views of the mountain in this area. Most well-known nature photographers have visited the Indian Henry’s Hunting Ground section of the Wonderland Trail more than once.